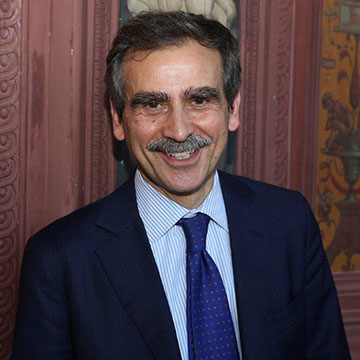 He has worked in the banking sector for over 40 years, most of them spent in the leading international banking group, UniCredit, which he joined in 1973. During next 20 years he held a number of management positions of increasing responsibility, leading different commerciaI business areas across Italy for more than 10 years.

In 1997, he was appointed Head of Group Planning and Strategy at Credito Italiano, where he was involved in the process of merging the newly-acquired banks that gave rise to todays' UniCredit Group. Two years later, in 1999, in view of his broad experience in mergers, he was appointed Head of Foreign Banks Group Planning becoming one of the key founders of New Europe Division, aiming at the development of the UniCredit Group in CentraI and Eastern Europe.

Between 2000-2003, Luigi Lovaglio served as Deputy Chairman of the Management Board and Executive Director of Bulbank AD - the largest bank in Bulgaria. In September 2003 he was appointed GeneraI Manager and Vice President of Bank Pekao Poland. From 2006 to 2007, he successfully implemented the merger and spin-off of BPH (Poland’s third largest bank, belonging to Group HVB-Munich), which was a unique transaction in the financial worId. In 2011, he was elected the Chairman of the Management Board and CEO of the Bank. He held the position until June 2017, when Unicredit sold its controlling interest in the Bank to Polish State-owned entities. Under his CEO leadership, Pekao, with its 15,000 employees, became the country’s leading company in terms of market capitalization (> EUR 10 billion), delivering significant and sustainable results while reaching one of the highest CET1 ratios (~17%) in Poland. His focus on long-term, sustainable returns as well as ethical aspects led to the decision to no longer offer CHF loans to retail customers, thereby sparing the Bank from the major problems that later affected the entire Polish banking system.

As of July 2022, he has served on the Board of the Italian Banking Association.

Luigi Lovaglio was born on 4 August 1955 in Potenza, Italy. He holds a degree in Economics and Business from the University of Bologna. In 2008, he was awarded the title of Italy's Commander of the Order of the Star of Italian Solidarity in recognition of his outstanding contribution to the development of economic cooperation between Poland and Italy.